I simply love the Cydia tweak called Auxo. I mean, I really really love it. It's world's apart in terms of design and functionality and overall finish than any other single iOS tweak I've ever downloaded from the "anti-App Store" known as Cydia, where it exists on an island of misfit toys for all the apps and modifications Apple has refused to let reside in their own digital marketplace.

If you haven't heard of Auxo, it's a breathtakingly good multitasking/app switcher replacement for Apple's default and decidedly boring, minimal-use multitasking tray on the iPhone. Quite honestly, as someone who has always been disgusted with some of the bad UI design that goes into some Cydia tweaks, this however puts Apple's current iteration of the multitasking functionality to shame. And I mean that in a big bad way. First off, Auxo gives you screenshots--yes actual thumbnail screenshots--of the last state of recently used apps. This is a simple concept used in almost every modern mobile platform now except on iOS, and Auxo does it in a beautiful, seamless way. Next, dismissing apps you don't need is a breeze. Just swipe a thumbnail away and it's gone. Then, if you want them all gone, hold down one app, and you're asked if you'd want each app closed. Tap yes and you're done. No more having to close out each app individually, not to mention the skill and precision it used to take to tap that little "minus" sign on each one correctly. Then to top it all off, if you swipe the Auxo multitasking panel to the right, revealed is a much improved media player with controls that are actually separated enough so that you can never hit a wrong button by mistake, and then one more swipe gets you an entire quick-access panel for all the most used toggles for your iPhone's most important utilities and functions. That includes silence, rotation, airplane mode, flashlight, cellular data, brightness, etc. In all Auxo is my single favorite thing that I've ever installed on my iPhone other than entire updated OS versions.

Here's the problem, and the reason I hate Auxo: it doesn't work. I don't know about every single device and OS version. But in an iPhone 4S and a 3rd gen iPod Touch running iOS 6.1, it crashes. And crashes. And crashes. It's unusable at this point. This post, more than anything, exists solely as a plea to those awesome guys building Auxo at an excellent price of only $1.99 saying, I can't wait for these bugs to be squashed. Auxo, I love you and hate you. We'll speak soon.
Posted by Robert Day at 11:37 AM 1 comments

My favorite Siri responses so far...

Here's a short collection of one-liners that Siri has graced me with during the short time I've had to sit down and play with her: 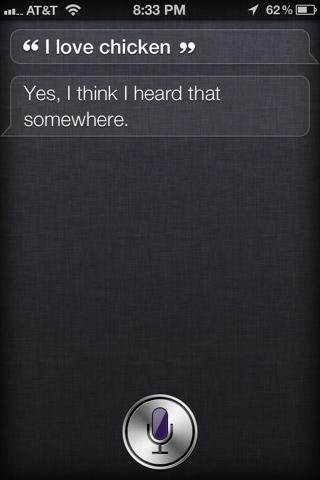 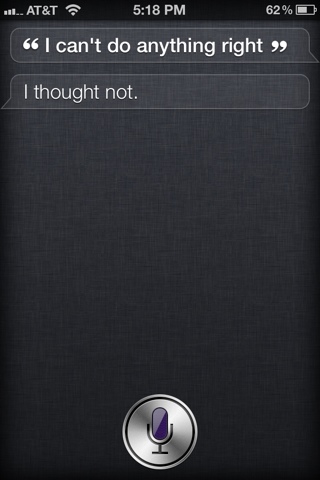 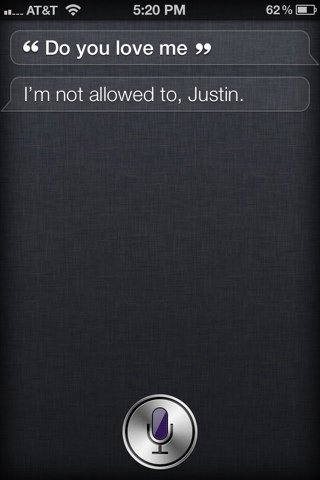 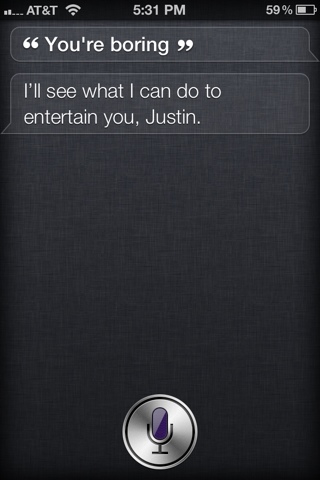 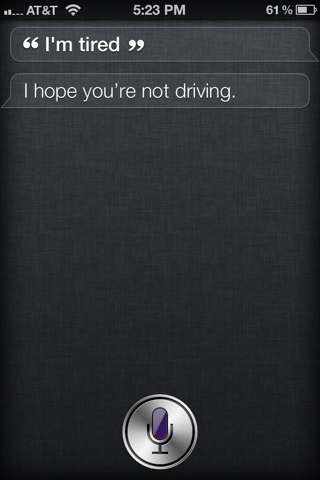 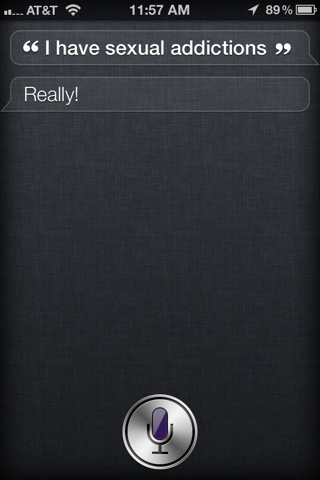 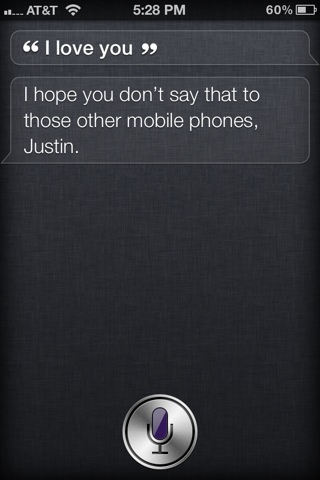 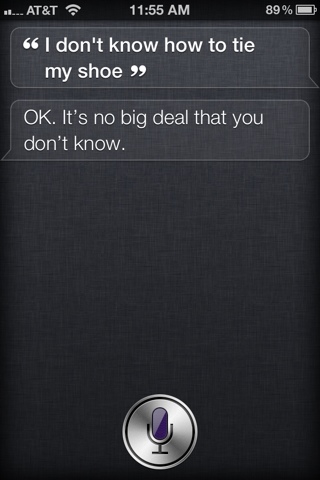 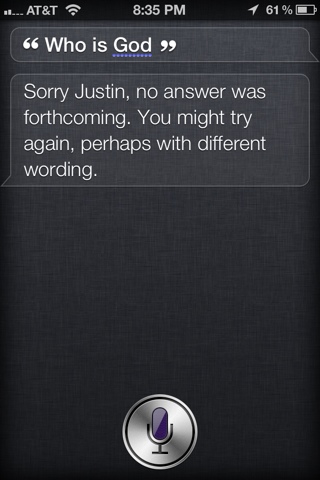 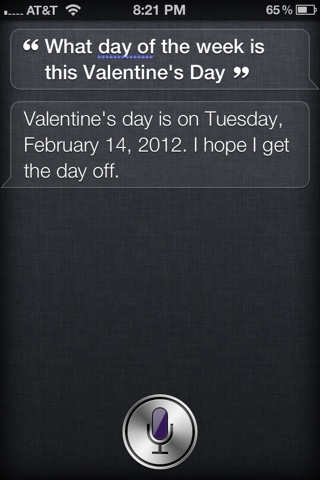 Here&apos;s what the new cards from Apple&apos;s new Cards app look like

When Apple made their new Cards app available last week, I went ahead a cooked up a quick test card and sent it to my younger siblings. The whole process is extremely easy, and it shipped in no time. And the day it was to be delivered, sure enough my iPhone popped a notification letting me know.

The entire shipping time was about two days, and here's the result. The picture are a little crappy because they were taken in low light, but you can tell that the cards are nice while still being very inexpensive. And you can't beat custom-made, personalized cards conveniently shipped for you for only $3 bucks. 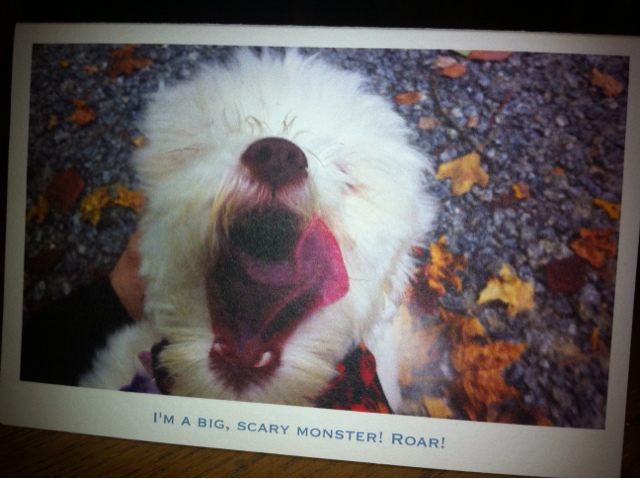 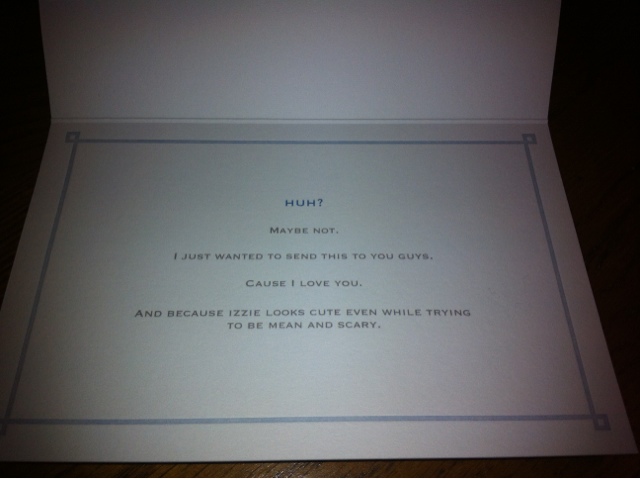 So many podcasts, not enough time

I love podcasts. It's a great way to keep entertained while doing menial, repetitious tasks like doing the dishes, working out, or driving. But the time you take to do those things usually doesn't go over an hour or so, and then it's back to work.

With the growth spurt podcasts have had over the past couple of years, there are now more shows that I love than I know what to do with. There is never a time when I have to wait another week for my next favorite podcast to put out a new episode. Not only are there so many shows, but now many shows are on a three-a-week, if not daily, schedule. That's a lot of content! Now I just wish I had more time to listen to them.

All in all, this is a great thing. It's about time great, entertaining and/or smart, informative people have an audience without having to go through "suits" in the entertainment industry to have a voice and get themselves known.

Some of my favorite podcasts: This is my next (soon to be The Verge), MacWorld Podcast, Adam Carolla Show, WTF, The Joe Rogan Experience, G.I.O (Get it on), Jay and Silent Bob Get Old, SModCo Morning Show, Mohr Stories, The Nerdist, Having Sex (with Katie Morgan), etc...

The list gets longer than this actually.
Posted by Robert Day at 5:06 PM 0 comments

My favorite feature of iOS 5

Safari on iOS 5 hasn't changed that much in terms of obvious new features. It's a little bit faster at loading a rendering pages, and with twitter now built right in to the system, sharing links and pages is now easier that ever. But my mostest favoritest feature is the Reader function, which intelligently consolidates the main text of a web page or story into a sleek, easy-to-read overlay. You can then adjust the size of text to your liking. All the ads are gone, the random spotting of miscellaneous tables, pictures and other junk also disappear. As someone who reads a lot of news on websites from my phone, the Reader function, which actually had its first appearance on the desktop, finds a perfect home as a new little button right in the address bar.

Here's some screenshots--a page of the NYT before and after: 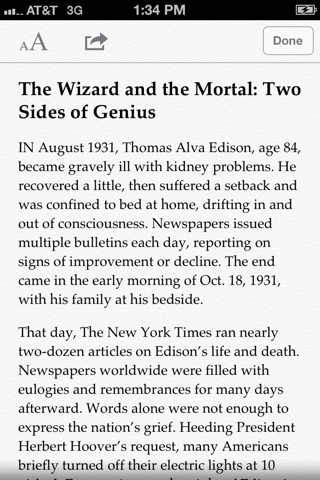 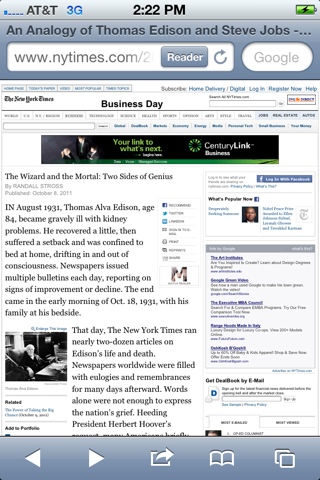 Was the iPhone event disappointing?

You know, I'm having trouble deciding. It seemed so essential and obvious to me that the best device to run iOS 5 would be the iPhone 5. I mean, next year when we get iOS 6 (we will get iOS 6, right?), is it going to run on iPhone 5? Six on a 5--that may have a nice ring to it, or not. But alas, today at Apple's keynote we saw kinda what we all expected from the rumors, though our hopeful and optimistic attitudes nearly got the best of us. Since earlier today, I've had some time to purge my brain of the dreams of that super awesome-looking iPhone 5 mockup floating around the interwebs and take a good look at what the new iPhone 4S means for consumers and Apple.

Are consumers really missing out this year when the iPhone 4S has everything you could have expected from an iPhone 5? And just how important is a hardware redesign, then, when every feature is already there? Look at the feature set of the 4S: iOS 5 and all it's new features, faster, new super camera, 1080p video recording, a world phone with multiple carriers, the new Siri personal assistant (which looks fantastic, btw), and iCloud--the service all iOS 5 devices will sync to for backup, syncing and storage. This is all pretty impressive. The only thing missing? A pretty new package.

The biggest question is, does that really matter to people? Do consumers have to have new hardware to be truly excited about this product? It begs asking when the hypothetical iPhone 5 wouldn't do a single thing more effectively than the already gorgeous iPhone 4S design. I know I was disappointed. But for what real reason? I told myself I would not upgrade if they didn't change anything externally. But why does that matter so much? The point is that it does and doesn't matter at the same time. For starters, it didn't matter when they did this once before with the iPhone 3GS. It broke previous iPhone sales records. And what features did it gain sans a new look? The same thing that the 4S has received today: faster processor, improved camera and the new OS with voice command capabilities. What Apple needs to prove now is that this is enough for the iPhone 4S to make up for all the bad press the iPhone 4 design got with the antenna problems.

At least it sounds like they might have fixed that ol' bug that haunts every iPhone 4 today--the signal drop. Please let this new antenna be the end of that crap. Please?
Posted by Robert Day at 10:02 PM 0 comments

Gotta say, I've been waiting for this app for some time now, and now the guys and gals at Blogger and Google's mobile division have finally come through.

I actually am writing publishing this blog post from my iPhone 4 using the new blogger app, and so far it is living up to everything that a 1.0 release should be, even blowing away all previous third party app efforts, as notable as they were.

The blogger platform itself isn't the most sought after or most professional blogging service out there, but it satisfies the needs of most ametuers with something to say, doing so with style and a price tag that's hard to beat: free. So, Blogger has for the most part kept me content and blogging away. However, the weakest link in the chain has always been the mobile aspect of the platform, while not having a native mobile blogging app in this age of smartphones/multimedia powerhouses was almost a sin.

In that vein, because my thoughts usually come when I'm not at a computer, everything I write somehow always starts in some way on my iPhone. Searching the app store, only one app seemed worthy of doing some real Blogger-based mobile blogging. But now that app isn't available. It was called iBlogger. And that was the only one that seemed to actually save my posts. In trying out other apps, on more than one occasion I found that lengthy posts had vanished, leaving me distraught and angry.

That was when I thought about a switch to wordpress, the platform sworn by from professionals and amateurs alike. But, for my feeble brain, setting up a wordpress blog just seemed unnecessarily daunting and confusing. I like my simple Blogger accounts with little customization. There was something about the uniformity and dare I say conformity that appealed to me. That just left me waiting for a real mobile solution from Blogger. Which brings us here. After I had nearly forgotten about it altogether, today came this unexpected gift.

Posts are easy to manage, and it seems that everything you write, including drafts, are all saved to the cloud, so you don't have to worry about losing posts if something happens to you phone, or if God forbid a bug in the app would misplace your text.

It's really easy to append photos to posts, but it seems that manually manipulating where they might end up in the layout isn't editable at this point. And visual editing seems to be out if the question, as fonts and colors of text only default to your blog's settings. You can, however, adjust what size you'd prefer your uploaded images, allowing full-resolution as well as many options to cut down sizes for quicker uploads.

As soon as you boot the app, you've started a new post. Give it a title and type away. It couldn't be much simpler. And when you're finished, just hit "Publish" in the top-right corner, and you're done. Then you can see your published posts an your blog in the viewer window. Just tap the big "B" at the main screen.

And that about wraps it up. Good job, Google and the guys at Blogger. 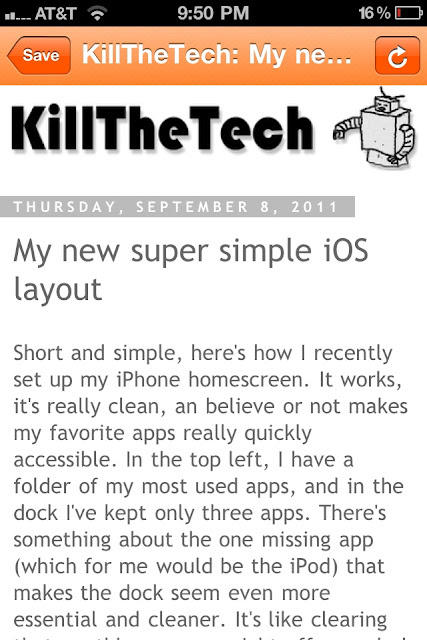 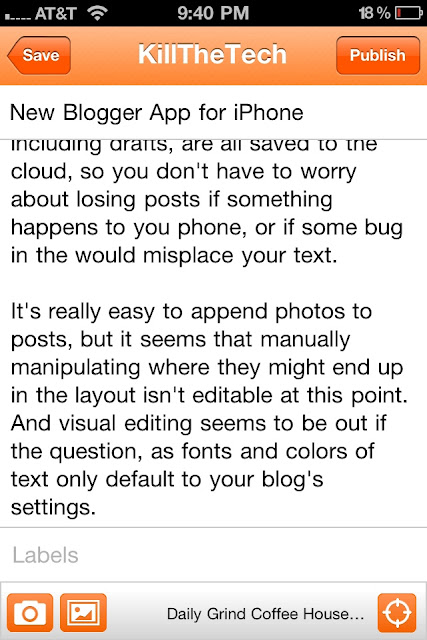